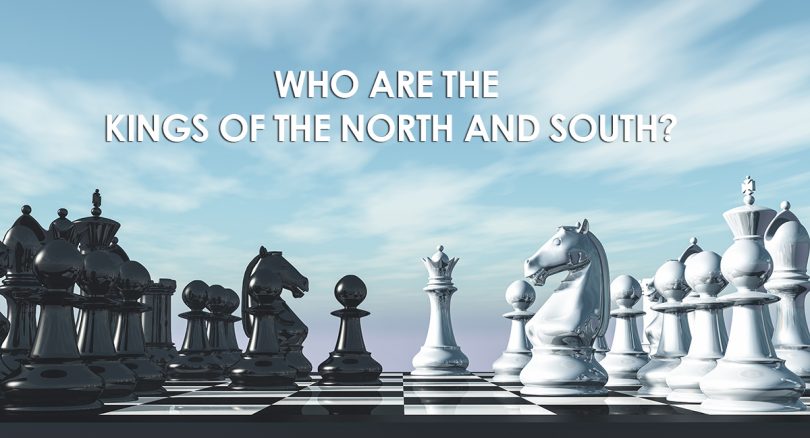 The following is an adapted excerpt of Pastor Myers’ presentation on the two kings of Daniel 11 at Village SDA Church near the Andrews campus in Michigan. You may also click to watch a thoughtful reflection on Daniel 11 and Satan’s Plan For the Adventist Church.

THE PRINCIPLE OF VERIFICATION. EVERY END-TIME PROPHECY IN ONE BIBLE PASSAGE CAN BE VERIFIED IN ANOTHER PASSAGE.

Having said that, let’s go ahead. I’m gonna share this. I believe that the papacy is introduced in verse 22, or rather verse 23, where the Bible speaks of the small power, or small people that grow into a greater power. I believe that parallels, the little horn of Daniel, chapter 7. It’s interesting that verse 22 is the crucifixion of Christ, by the Roman power, and then in verse 23 is the papacy. It would actually parallel, Daniel Chapter 2, where you have pagan Rome and Papal Rome, almost as if it’s one power. Toes of iron and clay.

In Daniel 7, you have the little horn mingled with the 10 toes, and then in Daniel 8, you have one symbol, the little horn, representing both pagan and papal Rome. It would make sense that Daniel 22, being the crucifixion of Christ, that verse 23, you immediately have this small people. By the way, remember that Paul said that it was after his departure that this antiChrist power would begin to come upon the scene. So it came upon the scene very early, in the early church or at the time of the early church.

I will also say that I believe that if the king of the north is the papacy in verse 23, then really, we have no other—and I’m not, you know again this is my understanding. I believe that verse 25, who of the papacy have been warring against during this, during their reign of 1260 years. I see, Islam fulfilling that role. I believe that this power, Islam is actually verified in the book of Revelation under the fifth and sixth trumpet.

It’s interesting that one of the things that’s said about these two powers is that they will speak likes at one table. If you look at the identity of the fifth and sixth trumpet, under one of those trumpets, it says that the scorpions, their power is in their tail. You know how we traditionally explain that power in their tail thing, right? Uriah Smith says it uses the quote or the Bible verse which says, “The prophet is the tail or, the prophet is the head that speaketh …” Um anyone know the verse? Is it Isaiah? Yeah. The prophet that speaketh lies is the tail, right?

Nebuchadnezzar is called a king of the north and I’m going to read it here, Ezekiel 26, verse 7, “For thus say the Lord God. Behold I will bring upon Tyre, Nebuchadnezzar King of Babylon, a king of kings,” notice that title. Who only does that title belong to? Jesus. “A king of kings from the north, with horses and with chariots,” oh man. Wait a minute. What? With what? With horses and chariots? As soon as you read that, as soon as you see that, you should be saying to yourself, wait a minute. So is God trying to tell us here that the history of literal Babylon will have some information for us on the identity of this spiritual Babylon at the end of time?

So by the time we get to Daniel chapter 1, Nebuchadnezzar has just defeated what nation? Egypt. You want to know why? Egypt has pushed against Babylon on behalf of Israel. So catch this. The king of the south pushes against the king of the north.

In Daniel chapter 2, Nebuchadnezzar hears troubling news. In fact, the Bible tells us that he has this dream and the dream what? Troubled him. And when he wakes from the dream, we know that Daniel and Shadrach or Daniel comes and explains the dream, and what do you think it is that troubled Nebuchadnezzar? He heard tidings that his kingdom was going to fall. Who did his kingdom fall to? The Medes and the Persians. Anyone want to tell me where the Medes and the Persians were located in terms of Babylon? They were from the north and the east.

Now let me say this. I believe the king of the south is atheism in 1798. You say, “Pastor, wait a minute. How’d you just switch?” Okay listen. What was the issue with atheism? What were they against? They were anti-two witnesses. Yeah? They were against the word of God. Egypt itself what not an atheistic nation because remember they worshiped other gods. As long as it wasn’t the God of the Bible. So you know what that tells me? That tells me that the king of the south is any entity that is anti-two witnesses.

SO NOW WHO IS THE KING OF THE NORTH?

We saw the name Michael is a name used when Jesus is going up personally against Satan himself. I’m suggesting to you that in Daniel 11, verse 40, the king of the north is not just the papacy. It is not just apostate Protestantism.

The king of the north is Satan himself.

It is only when the three-fold union occurs that the world will wonder. That’s when the deadly wound is healed. If the world is not wondering, we know the deadly wound cannot be healed. Three things that the king of the north comes with in Daniel 11, verse 40. He comes with chariots, with what? Chariots and horses and ships and he comes like a whirlwind. If you search the whirlwind in the Bible, you will see that it is almost exclusively used with the appearance of God.

Chariots. What kind of power is that?

Chariots. What kind of power is that?

The only thing that will win over Islam, atheism, agnosticism and all these other isms is when Satan himself appears and says, “See, my people were right.” As I said earlier, it would take a miracle to bring the world together, so when you’re reading in Daniel 11, verse 40, that this king of the north is able to sweep through all of these entities, it’s like he’s sweeping through the whole world and everyone is just bowing at his feet. The reason is because I believe this is what Ellen White describes as the overmastering delusion.

Now at Daniel 11 verse 40, what you have now is a merger of dragon, beast, false prophet for king of the north and a merger of all anti-two witness groups around the globe.

In Daniel 7, we get to know a little bit more about this man. Hey this man, he looks kind of, he has gold, silver, but wait a minute. On the inside he’s kind of like crooked. It’s the same man of Daniel 2. In Daniel 7, we get to learn a little bit more about that man. Oh, yeah, this man, whoa, he is rebelling against God and he’s thinking to change times and laws. He’s exulting himself against the prince of the covenant.

Yeah, check this out.

So wait a minute. Pastor, what are you saying? Here’s what I’m saying beloved.

Wait, what? Yes! He’s playing the world. He’s saying, okay, I can’t get you to be spiritual. I’m going to tell you God doesn’t exist. Atheism, yay! French Revolution, you know human rights and we don’t want God in the picture and socialism and yeah, yeah, yeah. All these things while on the right, he’s saying, oh yeah. Okay, I can get you to leave. No I’m God. No, no, no, no, no. Not that. I’m God.

Did you catch that?

So now what we have happening is the spirit of the world enter the church. You’re seeing this polarization within our church and what I believe is that Satan is trying to weaken our church through these principles of liberalism and conservatism in the name of God. That is not true conservatism.

Weakening the church so that when he makes his final attack, a kingdom divided against itself will not stand, but we know that will fail because Michael will come to deliver his people.