1  The Revelation of Jesus Christ, which God gave unto him, to shew unto his servants things which must shortly come to pass; and he sent and signified it by his angel unto his servant John:
2 Who bare record of the word of God, and of the testimony of Jesus Christ, and of all things that he saw.
3 Blessed is he that readeth, and they that hear the words of this prophecy, and keep those things which are written therein: for the time is at hand.
4 John to the seven churches which are in Asia: Grace be unto you, and peace, from him which is, and which was, and which is to come; and from the seven Spirits which are before his throne;
5 And from Jesus Christ, who is the faithful witness, and the first begotten of the dead, and the prince of the kings of the earth. Unto him that loved us, and washed us from our sins in his own blood,
6 And hath made us kings and priests unto God and his Father; to him be glory and dominion for ever and ever. Amen.
7 Behold, he cometh with clouds; and every eye shall see him, and they also which pierced him: and all kindreds of the earth shall wail because of him. Even so, Amen.
8 I am Alpha and Omega, the beginning and the ending, saith the Lord, which is, and which was, and which is to come, the Almighty.
9 I John, who also am your brother, and companion in tribulation, and in the kingdom and patience of Jesus Christ, was in the isle that is called Patmos, for the word of God, and for the testimony of Jesus Christ.
10 I was in the Spirit on the Lord’s day, and heard behind me a great voice, as of a trumpet,
11 Saying, I am Alpha and Omega, the first and the last: and, What thou seest, write in a book, and send it unto the seven churches which are in Asia; unto Ephesus, and unto Smyrna, and unto Pergamos, and unto Thyatira, and unto Sardis, and unto Philadelphia, and unto Laodicea.
12 And I turned to see the voice that spake with me. And being turned, I saw seven golden candlesticks;
13 And in the midst of the seven candlesticks one like unto the Son of man, clothed with a garment down to the foot, and girt about the paps with a golden girdle.
14 His head and his hairs were white like wool, as white as snow; and his eyes were as a flame of fire;
15 And his feet like unto fine brass, as if they burned in a furnace; and his voice as the sound of many waters.
16 And he had in his right hand seven stars: and out of his mouth went a sharp twoedged sword: and his countenance was as the sun shineth in his strength.
17 And when I saw him, I fell at his feet as dead. And he laid his right hand upon me, saying unto me, Fear not; I am the first and the last:
18 I am he that liveth, and was dead; and, behold, I am alive for evermore, Amen; and have the keys of hell and of death.
19 Write the things which thou hast seen, and the things which are, and the things which shall be hereafter;
20 The mystery of the seven stars which thou sawest in my right hand, and the seven golden candlesticks. The seven stars are the angels of the seven churches: and the seven candlesticks which thou sawest are the seven churches.

God loves us so deeply that he have the apostle John a glimpse into the future through Jesus.  This is so that John could write for us living in the future to understand prophecy and things 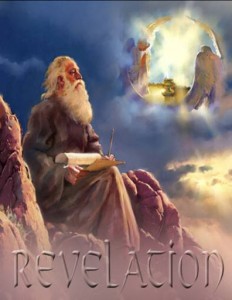 concerning the end of this world as we know it.  It is the testimony of Jesus Christ.  Studying the Word of God is important to anyone that wants a serious walk with God.  Therefore God blesses anyone that reads this prophecy and those that hear the prophecy.  Equally important, we are not to simply be hearers and readers of the  Word of God, but also we are to “keep those things which are written therein: for the time is at hand.” (vs. 3)

1:4 There were seven literal churches in Asia to which John directed this letter. Seven is also a symbol of perfection, wholeness, or completeness in prophecy. The term “seven churches” indicates the whole or complete church through all ages. The “seven spirits” denote the perfect Holy Spirit of God.

John is writing to the churches as a brother in Christ and indicates that he is at Patmos, a prison for the word of God and the testimony of Jesus Christ.  It brings to mind the verse in Revelation 14:12, “Here is the patience of the saints: here are they that keep the commandments of God, and the faith of Jesus.”  This is speaking about those that worship the creator God.

1:5 Christ’s death on the cross bore witness to the truth of the righteousness of God’s character and of Satan’s malignant lies. Jesus is our “faithful Witness” “that loved us, and washed us from our sins in his own blood.”  View more here.

1:10 John at Patmos on the Sabbath was taken in the Spirit and heard the voice of God telling him to write what he sees and send to the seven churches in Asia.  When he turns to look, he sees seven golden candle sticks.  (John was “In the Spirit,” meaning he was in vision, “on the Lord’s day.” The only day the Bible calls “the Lord’s Day” is the seventh-day Sabbath. Isaiah 58:13; Mark 2:28; Exodus 20:11. Of all the eight times that “the first day” [Sunday] is mentioned in the New Testament it is never called holy, blessed, the Lord’s day, or anything but a common working day.)

Also significant is what John sees as it appears that he is looking into the inner sanctuary or the holy place in heaven.  The mention of the golden candle sticks seems to place Jesus here ( “the lampstands of pure gold (five on the right and five on the left, in front of the inner sanctuary); the gold floral work and lamps and tongs.” (1 Kings 7:49)

Also significant is that Jesus appears “like the Son of Man, ” meaning that he is forever connected to his human form.

John fell at His feet as dead.  We can sense the love of God here in these verses.  He laid His right hand, the hand of power upon John and tells him not to fear.

1:18 The word here translated “hell” is the Greek word “Hades” which literally means the “grave or abode of the dead.” Jesus alone has power over life and death. 1 Corinthians 15:50-58. Christ demonstrated His mighty power over the grave by raising the dead to life and through His own resurrection. Death is not God’s original plan; it was the result of the sin of Adam and Eve. Jesus plans to restore things to the way He meant them to be. He promises to destroy this curse (1 Corinthians 15:26; Revelation 20:14) so that no one will ever die again. (Read More)

1:20 “The seven churches.” These messages have multiple applications. First, as a literal message for the historical churches to which they were addressed. Second, more broadly, the reproofs, commendations and promises apply to present day church congregations that have the same characteristics as the churches to which they are addressed. Third, to individual Christians who have those same traits. Last, each is a prophecy representing seven periods in the history of the Christian church from John’s day till the end of time, just like the time prophecies in Daniel. Each of the seven churches is symbolic of what God’s people would face during the succeeding periods of its history. (Amazing Discoveries).