God – Singular created the heavens and earth.  But immediately we are introduced to the Spirit of God.  It also seems that the original water was here but without form and void.  There was nothing here, no light, no stars, sun or moon.  Then God spoke saying Let there be light and there was light.  There is no mention of what the 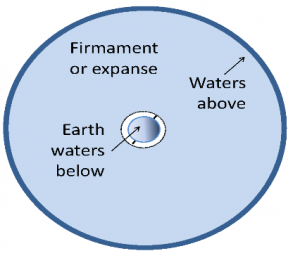 source of light was, but that it was good.  We learn also that a day starts at the evening, or the dark portion first, then the light portion, calling them the evening and morning.

On day 2, God divided the waters with a firmament or expanse.  This may have looked like image “Day 2”

Day 3 God gathered the water in one place letting the dry land appear.  This seems to suggest one land mass or no divisions on earth at the beginning.

Day 4 God created the stars and the sun and moon.  The are created in the firmament or expanse.  Time keepers were created to track years and seasons and days.

The earth is now ready to be filled with life.

Day 5 God created the sea animals and animals that fly in the firmament.

On Day 6 God created the land animals.  It is important to note the evening and morning signifying a day.  The author seems to make the point of a literal day by making 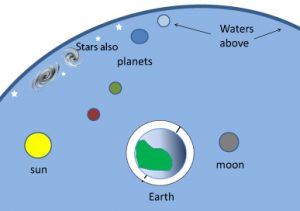 the clarification that each day being referred to was simply one evening and morning combination, or one dark and light portion cycle.  On day six we also get the clarification that God is a more than one individual.   One Godhead comprised of “Us” and “Our”.  “And God said, Let us make man in our image, after our likeness.” v26.  God created male and female in His image.  God said be fruitful and multiply and look after the earth.   God also set out our first diet.  He also outlined what the animals were to eat.

God looked at His creation and said it was very good.